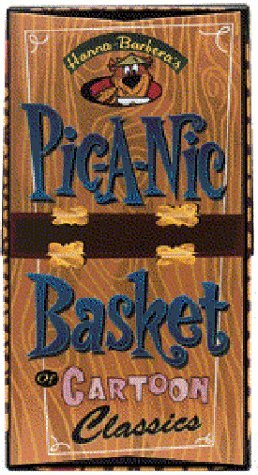 Bill Hanna and Joe Barbera, one of entertainment's most unforgettable duos, go together like peanut butter and jelly, Laverne and Shirley, and Laurel and Hardy. Having made a name for themselves with MGM's Tom and Jerry, the Hanna-Barbera team made history when they ushered Ruff and Reddy, the first made-for-television cartoon, into America's consciousness in late 1957. By 1960, The Flintstones were prime-time entertainment for the whole family, and as with its Hanna-Barbera brethren, the show's musical score not only nudged the laughs, but ingratiated itself into the very fabric of contemporary American life. Inventive, lively, and utterly recognizable, the remastered Hanna-Barbera Pic-A-Nic Basket box set is the mother lode of cartoon music. Handsomely packaged, with a faux basket handle and all, these four discs ambitiously tackle the massive canon largely assembled by lyricist Hanna and composer Hoyt Curtin. Discs one and two concentrate on the classics from the earliest tunes to a slew of Yogi Bear sounds to Space Ghost's theme and the zany Hong Kong Fooey theme. Disc three, an array of woodwinds, heavy loping tuba, poppin' slap-tongue bass clarinet, and rock- and jazz-inflected drum and guitar, pays tribute to the brilliantly animated Flintstones. Disc four, excellent filler for mix tapes, contains nearly 100 tracks of sound effects, from boings, footsteps, and explosions to bits of goofy dialogue. Bright moments are found in the trumpet-happy Jetsons theme, the groovy Scooby Doo main title, and the swingin' "Car Hop Song" from the Flintstones. These sounds, together with a terrific accompanying booklet, are altogether winning. --Paige La Grone